Follow Renata's Wonderlust on WordPress.com
Posted on May 24, 2017May 29, 2017 by renataswonderlust 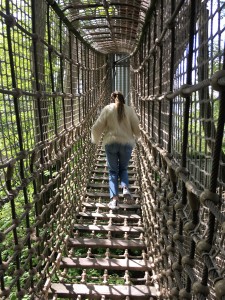 The weekend passed by in the blink of an eye. Sunday we spent a chill day biking through the very flat and fresh fields around Simon’s house (situated in a little and kind of unpronounceable town called Keerbergen), we also had a pique-nique, climbed trees, a rope course and walked around at a nearby zoo with Bo, a Belgian girl who also did a short exchange in France.

This morning, once again I am alone in a train. It took me a while to remember:  it’s Easter! But thinking about it I realise I don’t even mind being alone and not being able to follow the tradition of family gatherings and chocolate eating. Don’t misunderstand me, it is not that I don’t miss or care for my Paraguayan family, or that I don’t love eating an excessive amount of chocolate without guilt, but today I no longer feel the necessity we usually have for our habits and traditions. Instead I embrace the fact that this is the moment for other very new, wonderful things. And that’s exactly one of the things they say you need to accept through your exchange. So here I am pretty happy and proud while shortening the distance between me and the beautiful city of Brugges.

Trains seem to be my exclusive place for writing. In the wagons, adventures and excitement pause for a while; the landscape gets blurry, my mind clearer and my right hand talkative. We are coming back from Ghent and we have a long hour of travel ahead of us. This time we means me and Nani, another Paraguayan exchange student who is living in Belgium.

We had never really met or talked a lot until yesterday, when she hopped on the train to Brugges with me; but in spite of our strangers’ status, a few days ago she had offered to host me for the rest of my stay in Belgium. Something clicked when she sat in front of me and we submerged ourselves in deep conversation and intimate confessions. I kept on thinking how crazy it was that we had to travel to the other side of the world to meet each other and by chance or by destiny, call it what you want; we got along perfectly.

We planned our day in Brugges like applied millennials: googling until we found a great blog on how to spend a day in the city https://lostraveleros.com/brujas-en-un-dia I highly recommend it. We google maped our way to each place in that enchanting city filled with canals, bridges, 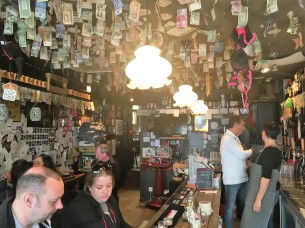 old bricked houses and a few flowers that were getting ahead of spring. Wandering around we found what must be the coolest and cutest bar in Brugges. So we sat down and got served by an animated waiter. We had a good laugh while he switched on from french to english and, after he heard us talking, even tried to mumble some words in spanish.

The beer tasting option that had called our attention to the almost hidden bar, ended up being more expensive than we thought, and we still had to get lunch. We just kind of sat there for a while considering our broke exchange student possibilities. Until I had an idea.

“Well Nani … beer has a lot of calories” I told her “The six different types of beers we are getting might as well count as a meal” A mischievous smile in my lips. She looked at me as if I was crazy, but I could see the idea growing into her. She doubted still. So I added “We could always get waffles afterwards” 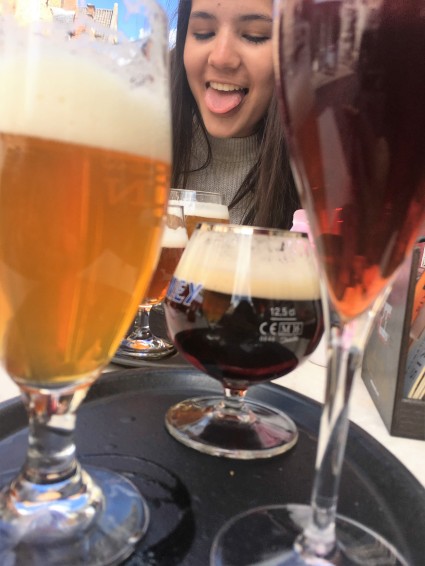 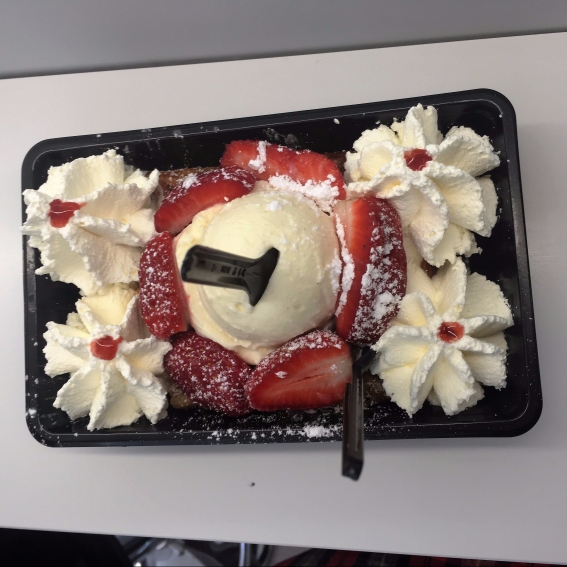 You can’t see it, but my waffle is under that delicious cover of ice-cream, strawberries and whipped cream

And that is exactly what we did.

Our stomachs full we kept on walking through that fairytale town. Grote Mark, which we were lucky to find in a festive mode since a fair was taking place there, little streets, original stores, chocolate stores where I spent freely with the excuse that it was Easter and I might as well enjoy, we also passed by a zillion photogenic canals; it was in t 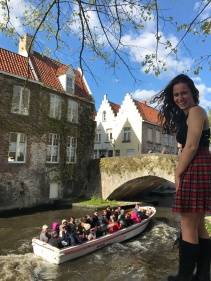 he Rosary Bridge where a group of tourists going by in a boat ride encouraged my vogue/posing for a picture. So the kind of awkward moment was captured by Nani alongside other lovely pictures (gracias Nani por los favores recibidos). Just one of those very weird and funny interactions that happen when you travel; you get in a new environment and you are surrounded by people who you don’t know, so you either gain or totally loose shyness. As an exchange student, for survival you must learn to do the latter, so most of the time it is just another laugh, another story to tell.

At the end of the day, going back to the train station, we found ourselves in small, empty streets. No one was around and in the distance we could hear the bells of an old church piercing over the rare silence that seemed to muffle the air around us. I had the crazy sensation of being  transported to a Grimm Brothers dimension, as if the bells had marked our passage and that at any moment we might stumble by a wonderful creature. The spell was broken as soon as we made the first step into the avenue  and the buzz of the city hit us abruptly. Still, we went back to Nani’s house with the impression that we had lived and seen something no one else ever has. Now I’m convinced that we actually had. Everyone lives traveling differently, we all see things no one else has, everyone travels in their very own dimension, somehow in their very. own. interior. self.

On the contrary of the beautiful sunny weather at Brugges, Ghent displayed today a very Belgian weather: cloudy. But still the sun peaked here and there in between the clouds painting the many sharp, decorated towers of gothic buildings and churches in a very special grayish light.

One of the very new and remarkable things I found in Ghent besides the ridiculous amount of towers is the again the amount of bikes. Those things for you my dear pedestrian, are the equivalent of Agent 007: with license to kill if you dare get in their way. I think I saw my life pass before my eyes at least 5 times in the form of the soft but sharp wind produced by a bike passing right next to me and got saved twice by Enzo (another Paraguayan living in Belgium) since I was staring around with the typical awe of a tourist in complete oblivion of the rest of the things going on around me.

Sadly, most museums or monuments to visit in Ghent were closed, but Nani and Enzo still managed to get me to very cool places. Like the Belfort tower, we went up 500 stairs to the top, and the view was definitely worth the 47 breathing crisis we went through on the way up. Probably not only because of the stairs but because I chose to go up in a rather unusual manner … 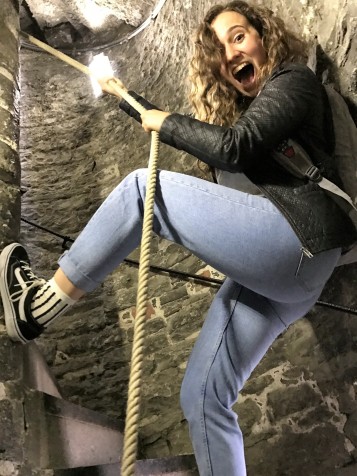 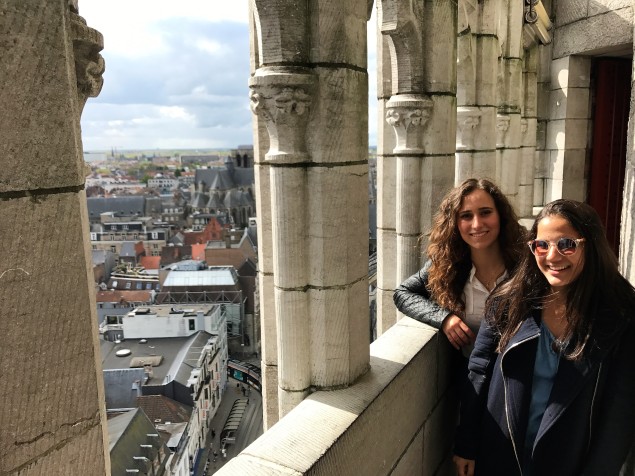 We rested our abused legs at the edge of the river. We talked. And laughed. And we contemplated, and talked, and laughed, and felt melancholic, and grateful and lucky. Three Paraguayans living in Europe. Three months left in it. Three months to go back. I know I might come off as repetitive, but they are just constant thoughts for any exchange student.

“Woha X number of months have already gone by”

“Only X number of weeks to go back”

You just keep repeating them in your head over and over through your whole exchange.

Our thoughtful contemplation and deep conversation were interrupted by the expected rain, and in between chuckles and puddles we found shelter in a bar.  I know I know, you might think “another one???” but hey what did you want us to do! It’s Belgium! They are everywhere. Belgian beer is a cultural UNESCO patrimony. Yes. Yes it is true. So we took conversation where we had left it.

Too soon it was time for me and Nani to go back. We said goodbye to Enzo and we closed up another adventure by almost loosing our train. Just almost.

Warm pressed bodies vibrating to the deafening music. Carelessness. Youth. The commercial latino music you end up singing your lungs out to. The pleasure of doing this in unison with other hundred like you. Belonging. Dancing. Attracting. Throwing your head back in laughter. Dancing on the table. Loosing your friends. Making new ones. Being told the secret of life. Breathing smoke. Walking aimlessly through the beating crowd. Dancing a little more. Forgetting everything but the ecstatic frenzy of swinging your arms up in the air.

That’s Le Carré (and much more). Every Wednesday exchange students from all over Belgium, and even from other countries like me, meet up in the city of Liège after midi to party their lives away. We took the train from Brussels with at least other 10 latino exchange students practically squatting a whole wagon, and talked at the verge of screaming in our very expressive hispanic way the whole 1hour30mins we took to get to Liège. I can say with no doubt it was probably the most intense and fun afternoon I ever lived. I will keep on dreaming about going back until I am lucky enough to make memories as crazy  -or maybe even more- than the ones I made today.

I should had been sleeping a while ago, but a bubbling excitement still tingled my skin, so I decided to let my pencil stumble through these pages. Tomorrow morning I’m saying goodbye to Nani and this awesome country to go back to France. Belgium will become a memory but vacations are far from over…

View all posts by renataswonderlust